Eric and I had a few days on the Icefields Parkway between ski mountaineering races in Jasper and Lake Louise. We wanted to climb something in the alpine and the Shooting Gallery on Mt. Andromeda which has moderate difficulties and a short approach seemed like a convenient choice.

Breaking trail to the base of the route. Photo: Eric Carter

We opted to ski to the base of the route which involved treading lightly over snow-covered scree. Once we abandoned our skis, the trail-breaking up the lower section of the route was slow. Eventually, being somewhat fearful of windslabs, we roped up and simul-climbed to the base of the crux step, generally clipping fixed anchors and even placing an ice screw or two in the brief sections of alpine ice. 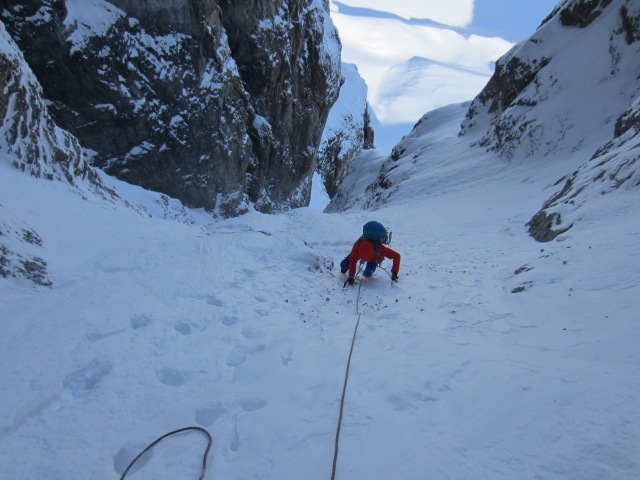 Eric arriving at the base of the crux pitch.

The crux pitch looked relatively straightforward from below. However, there turned out to be quite a bit of plastered snow and not very much actual ice. Just below the upper couloir, the ice ran out completely and I pulled over the bulge on insecure slabby rock (which I think is a common experience on this pitch). 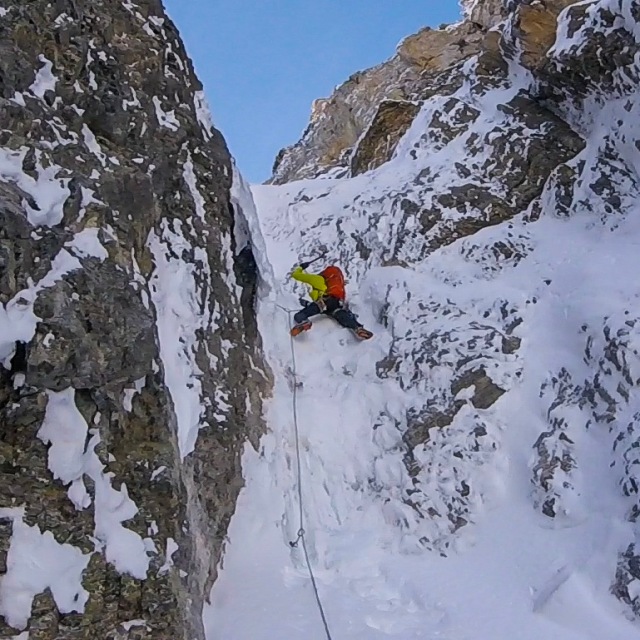 Leading the crux pitch. Although there was some ice, unfortunately, quite a bit of the white stuff in the photo is plastered snow. Photo: Eric Carter.

The upper couloir, which also looked somewhat innocuous, turned out to be more time-consuming and stressful than we’d hoped. With no ice, it was largely powdery snow covering low-angle compact rock. Although the climbing was very easy, finding gear and anchors was challenging and on a few pitches I ran the rope out its full length without any gear before stopping to scrape around and try to find a good anchor. I suspect that I spent as much time looking for anchors as I did actually climbing. Unfortunately, the climbing was just a bit too insecure for us to want to unrope and near the top where it got easier we kept the rope on out of a concern for the possibility of avalanches. 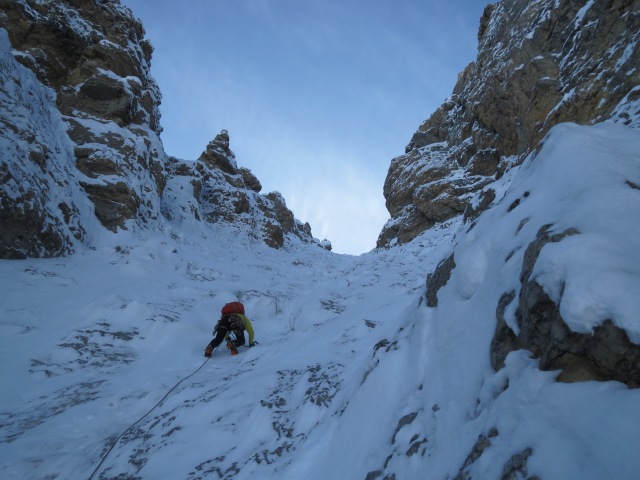 The upper couloir looked easy from below but turned out to be mostly unconsolidated snow on top of slabby rock. Photo: Eric Carter.

A tower near the top of the upper couloir was a welcome belay – much easier than trying to find gear in the snow-covered, compact rock. Photo: Eric Carter.

Wallowing the final section to the col. High winds were depositing snow in the top of the couloir and so we were happy to keep the rope on and some gear between us on this easy section. Photo: Eric Carter.

From the top of the route, we had originally discussed continuing up the ridge above to the summit of Andromeda. However, we had taken longer than planned, it was very windy and the ridge didn’t look particularly easy. So, like most parties we descended the snow-covered scree slopes (no fun in crampons) into the North Bowl. From there we roped up for the glacier where blowing snow made it difficult to see the crevasses. After a few stressful moments navigating the broken lower section of glacier in blinding wind-driven snow, we were back at our skis and all that remained was to avoid hitting too many rocks on the way out. We were back at the car a little over 9 hours after leaving. 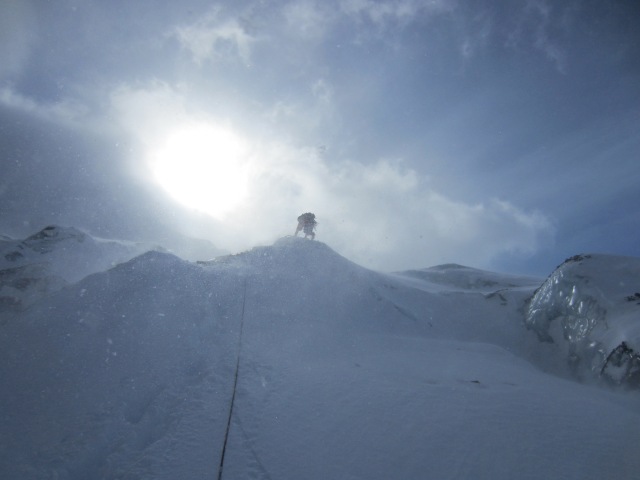 Descending through the short bit of broken glacier. The blowing snow made it difficult to see crevasses so we tried to stick to the exposed blue ice where possible.