Dakota and I were staying in Andorra having just completed the ELS 2900 race over the seven highest peaks in the country. I was sick and the weather wasn’t great, but on the recommendation of a couple of french climbers we met during the race, we drove over the high pass into France to check out the Dent D’Orlu near Ax-Les Thermes.

Dakota on the approach. The route climbs the face near the left skyline.

There are routes as long as 35 pitches on the peak, but given that we didn’t leave the car until after noon, we opted for the shorter and less committing East Face. We chose the 11 pitch route Fleurs de Rhodo because it sounded like the most classic route on the face. In retrospect, I suspect that most of the routes are of very similar character and quality. 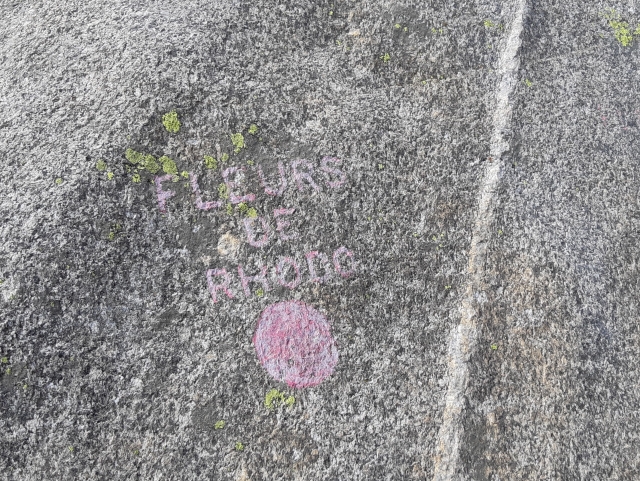 The name of route painted at the base. Useful when you don’t have a guidebook.

From a distance, the face didn’t look very inspiring as there is quite a bit of vegetation filling every weaknesses in the rock. However, the route mostly stuck to the open faces and the rock turned out to be excellent and highly featured granite. Although quite low angled, there were almost always interesting holds and it rarely felt like pure slab climbing.

Dakota climbing low on the route.

The topo that I found online had a grade of 6a (about 5.10-) but we both felt that it was in fact much easier. The crux pitches involved some small roofs on generally good holds. Dakota, who had borrowed climbing shoes that were painfully small, ended up doing much of the route in his running shoes. 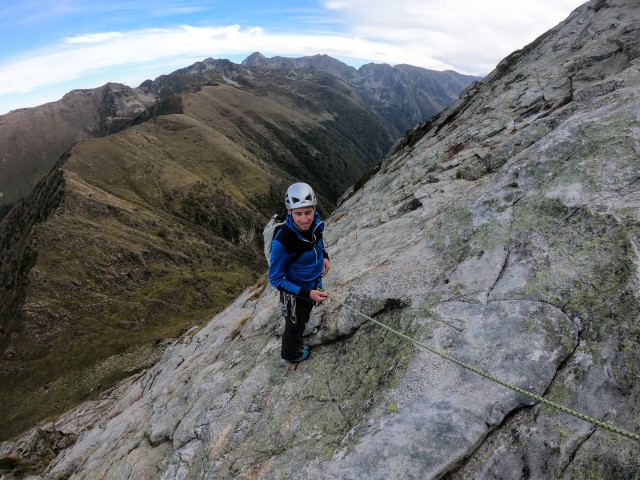 Dakota was very good-natured in accommodating my desire to go climbing.

Nearing the top of the route.

Easy sport climbing is a pretty efficient and we were back at the car a little over 4 hours after leaving. While the Dent D’Orlu isn’t really a destination in its own right, I was happy to have checked it out while we were in the area.