The West Ridge of Copilot is a rather unimpressive route. Dick Culbert who made the first ascent in 1965 described it in his guidebook as “none too inspiring class 3-4 on fairly good rock”. It hadn’t really occurred to me to check it out until Kevin McLane awarded it a coveted “smiley face” icon in his latest Squamish climbing guidebook. At 4th class, I figured I could surely scramble up it the next time I was out training in the area.

Karina approaching the West Ridge which follows the righthand skyline.

My first attempt came in July of 2018. I was recovering from a minor back injury and my confidence was at a bit of a low. After climbing over the initial bushy ridge, I arrived at the crux notch and pretty quickly concluded that I didn’t like the looks of the exposed traverse from the col. 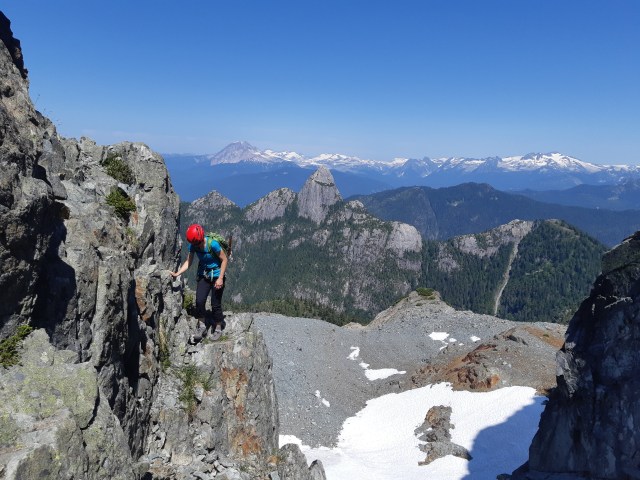 Karina climbing down into the crux notch.

I chalked up my first failure to having an off day and returned a couple months later with Eric, this time with a short rope and a few pieces of gear. At the notch, we examined the traverse but Eric was too sensible to want to trust the hollow looking blocks. There is a more direct line out of the notch but neither of us were too keen on it in our running shoes and with a very meagre rack.

My third attempt came after Karina and I had bailed on a more serious objective in the Sky Pilot group (my second failure on that route). As a result we had a little more gear than I’d had the last time around. At the notch, I climbed up and placed a high piece of gear before tip-toeing out over the hollow blocks. Just as I thought I might have to actually pull on one of them, a jug appeared above me and I was able to swing over to a ledge with very little difficulty.

Looking back on the last notch in the ridge.

Above, we traversed easy ground around the right side of a tower to a second, higher notch. Above was a pretty impressive chimney, but instead we traversed right and around the corner to a short corner leading to the summit. From the summit, we made four quick rappels down the standard East Gulley.

Rappelling the East Gulley – route that is even less inspiring than the West Ridge!

While hardly a local hidden gem, the route was a good reminder that “Culbert 4th class” is best not taken too lightly.