It’s raining again here in Squamish and the high freezing level isn’t exactly inspiring me to get out skiing today.  However, I’ll avoid any more ethical ramblings for the time being and instead try to post something more visually, as opposed to intellectually, stimulating. I happen to be daydreaming about sunny rockclimbing and so I thought it would be appropriate to post a few photos from a couple of multi-pitch sport climbs in Spain.

Sarah Panofsky negotiating a decrepit section of the Camino del Rey in El Chorro. This suspended walkway was built so that the King could survey the construction of the railway through the narrow gorge. It is now falling apart but thankfully there's a cable running along it to clip into.

In January of 2008, Stefan Albrecher and I got sick of planting trees in the damp and desolate hills of Northern England and Scotland and hopped on a plane from London to Marrakech, Morocco.  After a few weeks of being tourists, Stefan left to return to Canada and I began to make my way towards the Moroccan coast.  I arrived off the bus in the city of Fes at 3am in a state of mild intestinal distress, only to be swarmed by a group of kids asking, and eventually demanding, that I give them money.  Trying to escape, I ducked into a hotel and asked for a room, only to have my credit card be declined.  I later discovered that someone in North Vancouver had made a copy of my Visa and had been using it to buy gas for the last month.  What’s more, my bank account was empty; the owner of the company we’d been working for was refusing to pay us because a freak snow storm had apparently flattened many of the trees we’d planted.  I used my last few dirhams to email my parents and buy a loaf of bread and then settled in on a park bench next to my backpack full of climbing gear.  My parents were off having an adventure of their own, but eventually they bailed me out and I was able to make my way to Tangier where I caught a ferry to Spain.

All of this is to say that when I arrived in El Chorro and met up with my friend Sarah, I felt a great sense of relief to have landed in such a relaxing and idyllic place.  We spent most of our time climbing on the many excellent sport crags and lounging around in the sun.  However, on my last day we climbed an adventurous ten pitch route called Zeppelin.  The approach involved rappelling off a railway bridge and into the bottom of the gorge.  Most of the climbing was enjoyable and moderate, although a roof at mid-height proved to be a bit challenging for my feeble arms.  Needless to say, I was sad to have to leave Spain and return to the dampness and drudgery of tree planting.

Sarah Panofsky at a hanging belay midway up Zeppelin in El Chorro.

High on the Paret de les Bagasses. Photo: Rich So.

This route on the Paret de les Bagasses (bag asses?) sounds quite impressive, but in fact most of the climbing is very moderate with only a few harder moves thrown in.  In April of 2009, Rich So and I climbed a few routes on this wall on days when we were tired of being humbled by the warmups at Terradets’ signature crag Les Bruixes.

Some of the bolt hangers are very helpful on the Paret de les Bagasses. This one is on the classic, and very polished, route Smoking.

On Postmorten. I'm not sure why I'm looking so concerned. Photo: Rich So

The Roca Regina is apparently the “queen” of Spanish big wall climbing.  The rock at the beginning of this route left a little to be desired but it became increasingly flawless as we gained height.

Looking down after a particularly amazing pitch of overhanging jugs. 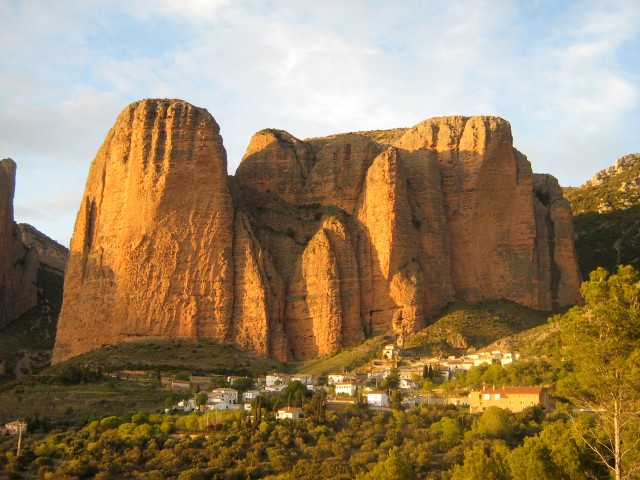 After a few weeks of generally rainy weather in Terradets, Rich So and I decided it was time to check out Riglos in the Huesca province.  Sadly, the rainy weather followed us, but we nonetheless managed to climb every major formation in the area.  One particularly memorable climb was the Murciana route on the Pison.  Starting up the route, we quickly caught up to a slower Spanish party.  We soon had another party on our heels which turned out to be well-known climbers Alex Huber and Heinz Zak.  Alex was rehearsing the route for a future free solo ascent and Heinz was there to take pictures.  Everything went smoothly until Rich was preparing to follow the crux pitch.  Alex and Heinz were also at the belay and, not wanting to climb around behind them, Rich decide to climb harder moves than necessary straight above the anchor. It turned out to be more difficult than Rich had bargained for and he slipped and fell, landing with his ass directly in Alex’s face.  Heinz and I both thought this was hysterically funny although some of the humour in the situation seemed to be lost on Alex.

Richard So, Alex Huber and Heinz Zak. Note the look of concern on Alex's face. 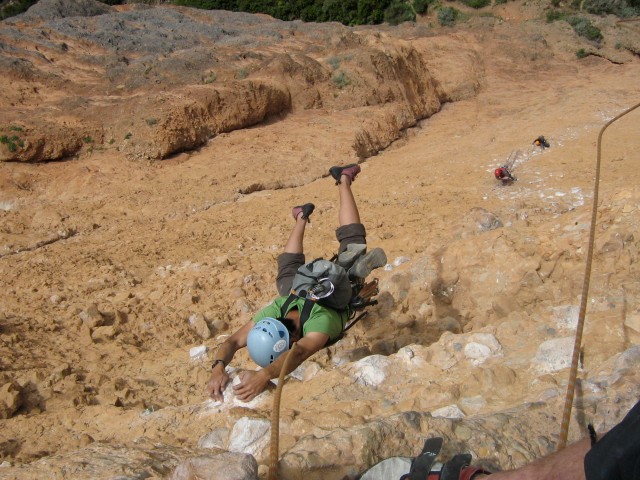 Fiesta is the most famous route in Riglos and deservedly so.  The rock in Riglos is a unique and juggy reddish conglomerate that takes some getting used to but is actually remarkably solid.  With eight sustained pitches of overhanging jugs, Fiesta de los Biceps is pretty much my idea of the perfect sport climb.

It gets pretty steep near the top. 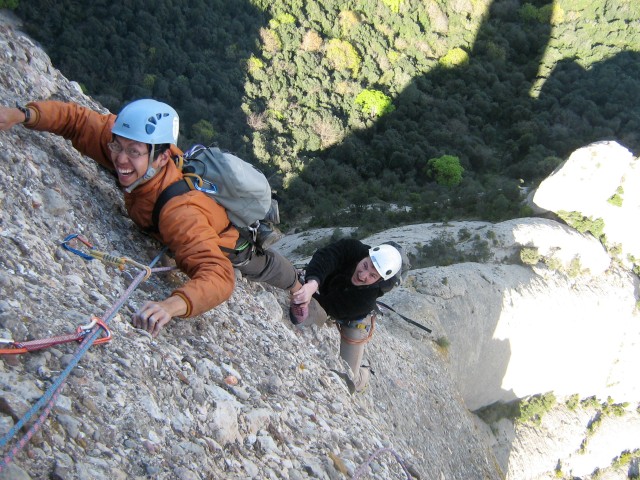 Rich So and Laurent Soyris on the Cavall Bernat.

I met Laurent Soyris in Indian Creek in October of 2008.  He pretty much fulfilled every stereotype I might have had about French climbers, from his chain-smoking to his tendency to pull on the odd quickdraw when things got tough.  We later climbed a few routes together in Chamonix where he showed me other French techniques such as how to rappel off the telepherique guard rails and how to weave your rope around guided parties in lieu of placing gear.  He came out and joined Rich and I for an ascent of the Punsola-Reniu route on the Cavall Bernat spire and we had a great time trying to come to grips with the small, intricate cobbles that characterize the climbing in Montserrat. 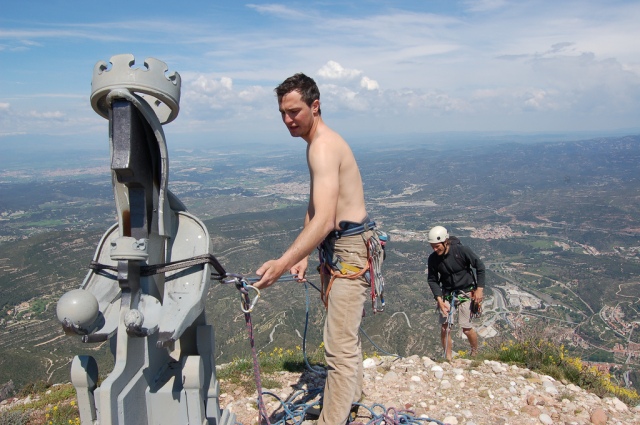